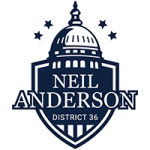 First responders from across Sen. Neil Anderson’s Senate District were honored and thanked for acts of bravery during his First Responders Appreciation Breakfast and Ceremony at the Candlelight Inn in Sterling and Theo’s Java Club in Rock Island on Oct. 26.

“Anytime there is danger, your first response is to get away, but not for first responders,” Anderson said. “Their everyday acts of selflessness and courage – not knowing if they will return to their family after their shift – deserve honor and praise. While this ceremony is specifically highlighting those who exemplified fortitude in the highest regard, it’s also a time to say ‘thank you’ to all the special men and women who put themselves in harm’s way to save lives and serve and protect our communities.”

Crews helped rescue an individual after a power line accident at Circle K in Sterling. Because the individual was right below low hanging power lines, in extreme pain from burns, crews used pile poles to hook onto the man’s belt to drag him from under the wires. Life saving measures were then administered to the individual while he was being trauma packaged, where he was airlifted to a hospital in Rockford.

Sgt. Jon Cater helped save a man from a burning house. A 10 year veteran of the Rock falls police Department, on Dec. 20, 2017, Sgt. Cater was dispatched to a house in Rock Falls that was fully engulfed. Upon arrival, family members were trapped inside. Sgt. Cater went to the west side of the house and observed two hands reaching up from a basement window. Sgt. Cater proceeded to kick out the basement window and then dragged the male subject to safety. Other members of the house were reached by other bystanders at the scene and no one perished in the fire.