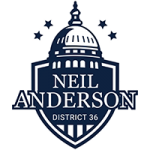 Starting January 1, Illinois will join ten other states and the District of Columbia in allowing for the sale and use of recreational cannabis.

Although sales will begin January 1, the number of locations consumers will be able to purchase cannabis products from will be limited for several months. That’s because the state is currently only approving recreational licenses for existing medical cannabis dispensaries. The state will begin to award licenses for new business owners later in the year.

As a reminder from law enforcement agencies, public consumption and driving under the influence of cannabis is still illegal.

2019 will be a year the Illinois State Police never forget. With three tragic deaths and numerous other incidents causing injuries, 2019 broke records early in the year for the number of accidents involving our State Troopers along Illinois roadways.

The drastic increase prompted the Illinois State Police to ramp up patrols to enforce Scott’s Law, more commonly known as the “move over law,” requiring drivers to reduce speed and switch lanes when approaching an emergency vehicle on the side of the road. As of November 3, 5,860 tickets had been issued for Scott’s Law violations. During the same period in 2018, 738 citations were given.

The General Assembly and the Governor also took the tragic incidents of 2019 seriously and passed several measures into law. Beginning January 1:

Illinois motorists may want to think twice about disobeying traffic laws next year. Starting January 1, drivers can expect to pay more for passing a stopped school bus and speeding through a construction zone.

New rules of the road

Some changes are coming about what is not allowed on Illinois’ roadways. Beginning January 1, Senate Bill 87/PA 101-0189 will make it illegal for vehicles to have tinted or smoked lights. Law enforcement officials say these lights often make it difficult to see the vehicle.

Also, starting in the new year, Senate Bill 86/PA 101-0297 will add to the current ban on cell phone use while driving by prohibiting drivers from operating a vehicle while also watching or streaming video on a device.

Finding a location to change that little one’s diaper will become a lot easier for parents starting in 2020. House Bill 3711/PA 101-0293 requires all public buildings with restrooms open to the public to have at least one baby diaper changing station accessible to both men and women. Additionally, signage is required near the entrance indicating the location of the diaper changing station.